With this issue continuing to frustrate unsuspecting Mercedes C Class owners, we thought maybe we should go back to our initial write-up to continue helping those of you who may be suffering.

This time we look closer at the M271.9 “Kompressor” 4 cylinder found in the W203 and early W204 bodied Mercedes Benz C180 and C200. We explain why we believe they fail, how we can repair it for you while saving you hundreds if not thousands of dollars and we explain what parts we will replace. You can find out more about the M271.8 ” CGi” turbocharged motor, found in the W204 C200 and C250, in the earlier blog. Follow the link below to read it.

(You can read our first blog here)

Over a year has passed since we last touched on this topic and since then we have carried out these repairs more times than we ever imagined, gaining more quality experience, and with experience, comes knowledge. When you repair something over and over again, you begin to understand the finer details of why it fails, the best method of repair and how to help prevent it happening again.

We initially said that timing issues are more common in the later C200 and C250 CGi vehicles. Well, that was true back when we said it. Since then we have repaired roughly the same amount of Kompressor motors as we have CGi ones. In doing so, we have learnt the major differences in the faults between the two. The initial and major fault in both is not the chain or tensioner, but in the camshaft adjusters (gears) located at the front end of each camshaft.

While an internal failure of the cam adjuster causes the chain of the CGi variant to elongate due to the “slapping” effect it has on the chain links, the chain of the Kompressor engine, even though slightly “stretched”, is never bad enough to be the blame for the “rattle” noise you hear just before shutting down and not restarting.

While both motors create a similar noise, sometimes explained as “the death rattle” or “rattle of death” on forums we have read, they are not quite produced in the same way.

View our short video that shows clearly what creates the “rattle” in the later CGi engine here. 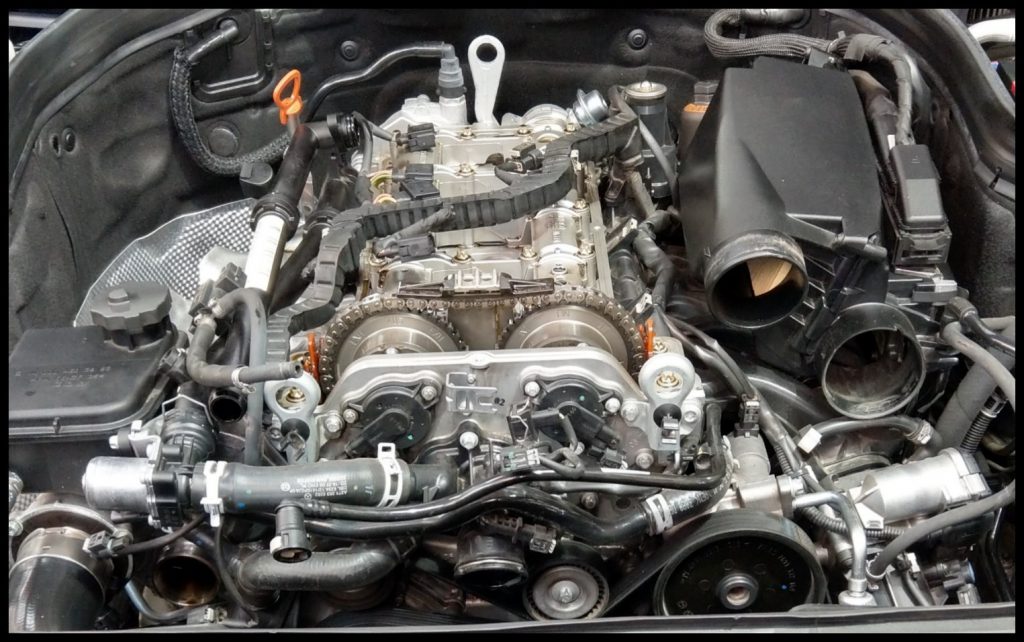 As we had described, the CGi motor will show signs of timing components nearing complete failure early enough to get it repaired, before leaving you completely stranded as it may keep starting and driving for days, weeks or months before complete failure (We do not recommend driving it this way though as you can never be sure). This is by creating the loud rattle noise on start up for a few seconds and is usually partnered with an engine warning light on the dash and/or other symptoms. The only reason it does still run is because even though it is noisy, the engine timing is still within its limits to run and drive, but the ECU by now should see that it’s not within its peak limit to do so correctly, therefor illuminating the engine warning light.

The Kompressor motor however, while it does give a rattle during cold start-up, it’s almost a guarantee that this will be the last time you start it, because if it doesn’t stall on you straight away after this, it most likely won’t start the next time you try. Oh and it too will be accompanied by a check engine light but unfortunately by this time it will be too late.

This is what was described to us by the owners of every one of these supercharged C180/C200 vehicles when we asked them to explain what they noticed before the vehicle stopped and each one of them has been towed to our workshop rather than driven like most of the CGi variants. 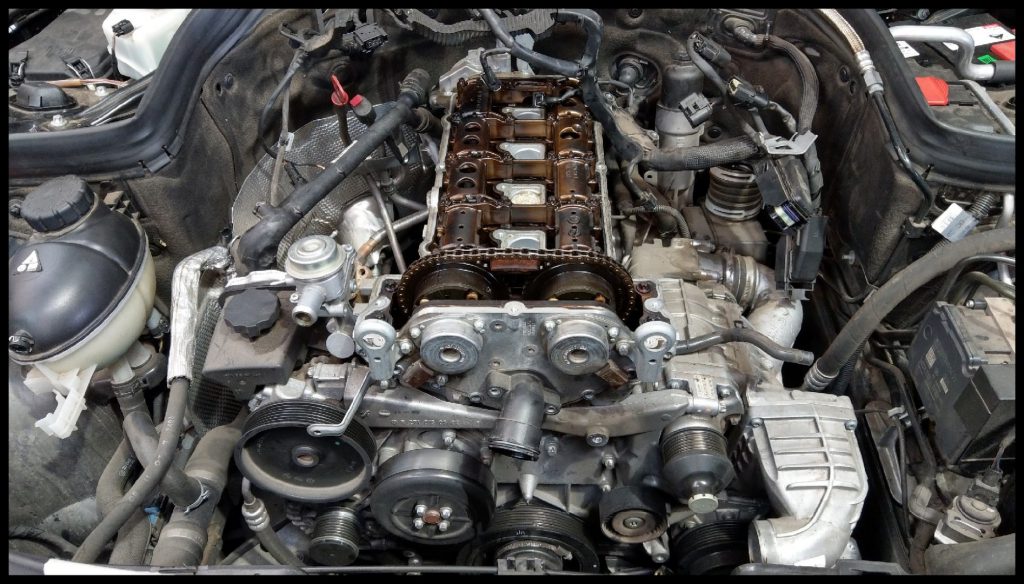 Fig 3. After being inspected and pulled apart by another workshop who quoted almost $8,000 to pull the cylinder head off for repairs, the owner decided to call us for advice. 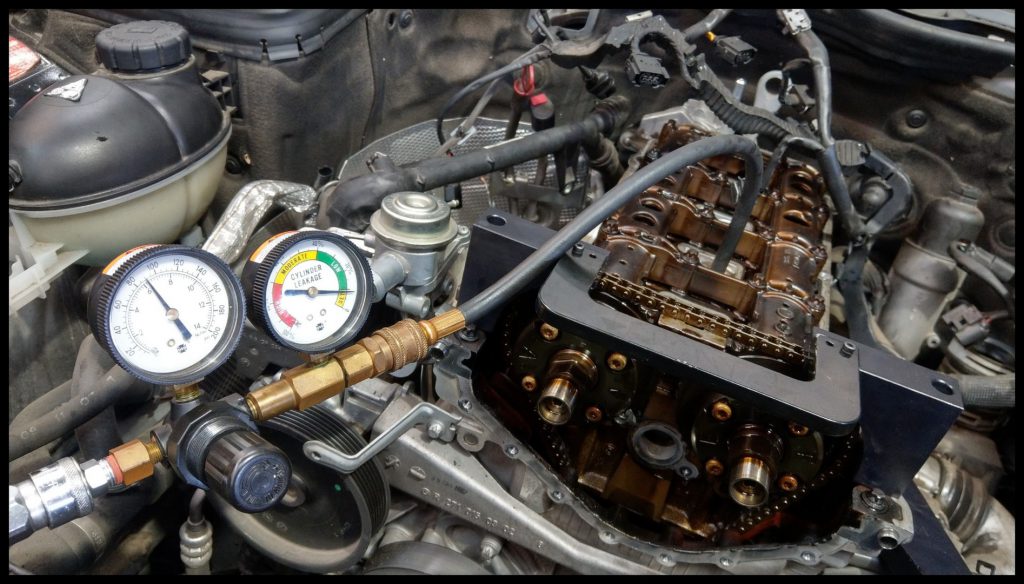 Fig 4. Without removing the cylinder head, we were able to asses the damage before correcting the timing and replacing required parts for less than half the amount the customer was originally quoted.

With all this being said, it’s quite possible the reason you may be reading this is because you have possibly experienced this already and are looking for answers… How could this happen? And what to do next?

The rattle noise heard in the earlier M271.9 is not like the later model caused by a slapping momentum of the cam adjuster. It is actually the sound of the chain links, skipping over the almost completely worn out teeth of the earlier cam adjusters. (Refer Figure 5 below.) This usually occurs at around 100,000kms. Maybe more or less depending on the service history of the vehicle but this figure being an average that we’ve seen.

It is mainly caused by poor quality materials used in the components during manufacturing in order to save costs, but poor or irregular servicing intervals, low quality oils, low oil levels or incorrect oil viscosity can combine with this and help reduce the life of these parts.

Once the teeth on the camshaft gears are worn down to a certain point, the timing chain tensioner is unable to keep enough pressure on the chain in order to keep it from skipping over the worn teeth. The reason for its complete failure occurring when starting the car cold is that the chain tensioner uses 2 methods of keeping the chain taught. Internally, the timing chain tensioner utilises a spring that presses a plunger against the chain to hold it tight while the engine is not running. Once the vehicle is started, the tensioner is fed an amount of oil pressure to help the plunger press against the chain and overcome the forces pressing back on it caused by the momentum of the rotating engine.

During a cold start and once the teeth on the gears have worn to a point that no longer allows it to grip the chain enough, the spring in the tensioner is unable to hold enough pressure against the chain long enough for the oil pressure to build up, allowing the chain to skip over the teeth and cause the engine to no longer be correctly timed. If you’re lucky, the chain will only skip 3 – 6 teeth out of timing on either the exhaust or intake camshaft after several attempts to start the engine. The engine light will now be apparent as the ECU has determined that the timing is no longer within its specified values.

Once the vehicle has failed, the best thing to do is to not keep trying to start it, as the more the chain slips over these teeth, the further out of timing it will become and can cause severe engine damage. Give us a call and mention this blog. We will be more than happy to assist you. Assuming the engine has not suffered more than just the worn out cam adjuster gears and a slightly elongated chain, then replacement parts are as followed:

In some cases, depending on the condition of the internal engine components, we may recommend another oil and oil filter replacement within 5,000kms of repair to ensure perfect oil quality within the motor. 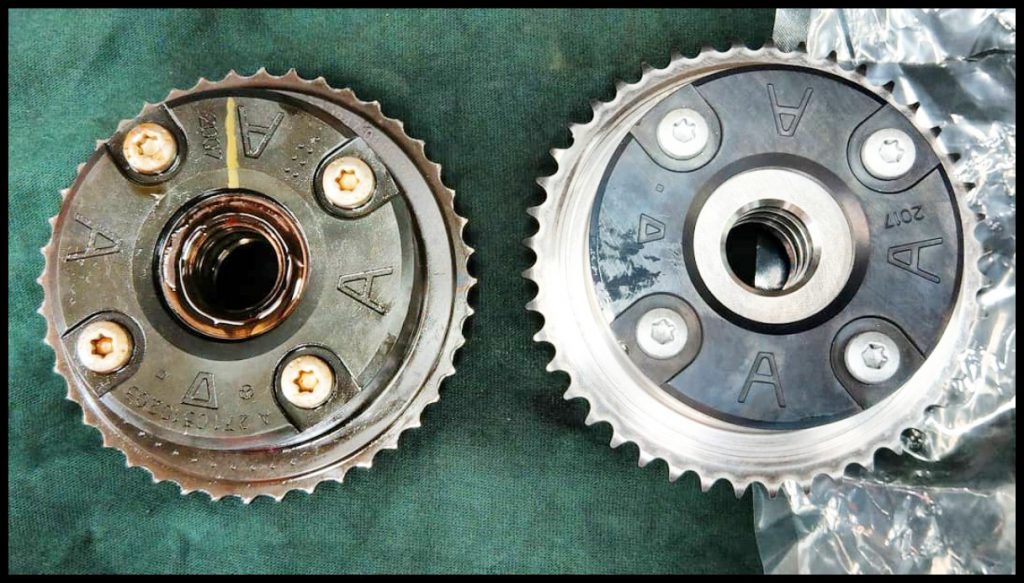 We only use quality aftermarket components that have proven to last much longer than the original items and we use only quality OEM oils and filters. All parts we supply and fit come with a manufacturer warranted. If you would like a quote or have any other inquiries, please call

Call for a competitive quote. All worked backed by a guarantee!