Bringing a classic back to life

When a loyal customer of ours, David, showed up in his newly acquired 1996 Mercedes-AMG w202 C36, we couldn’t wait to get stuck into restoring it’s original looks and performance.

Despite the gorgeous Mercedes ‘Ruby Pearl Metallic’ paintwork looking dull and covered in inches of dust, and the sound of the heavily AMG modified M104 engine clearly only running on 4 of its 6 cylinders, we were still in awe of this classic beast and immediately saw it’s potential!

For those of you who don’t know about the W202 Mercedes AMG C36, you won’t understand what makes this car special. So let’s start by giving you a quick run down on this classic beast…

Prior to 1990, Mercedes-Benz and AMG were seperate companies, with AMG being an aftermarket performance name responsible for completely remaking Mercedes-Benz vehicles into performance machines. In 1990, AMG signed a contract with Daimler-Benz which joined the two companies, meaning Mercedes-AMG vehicles were now able to be purchased straight from a dealership with an AMG package factory fitted and covered under a new car warranty. 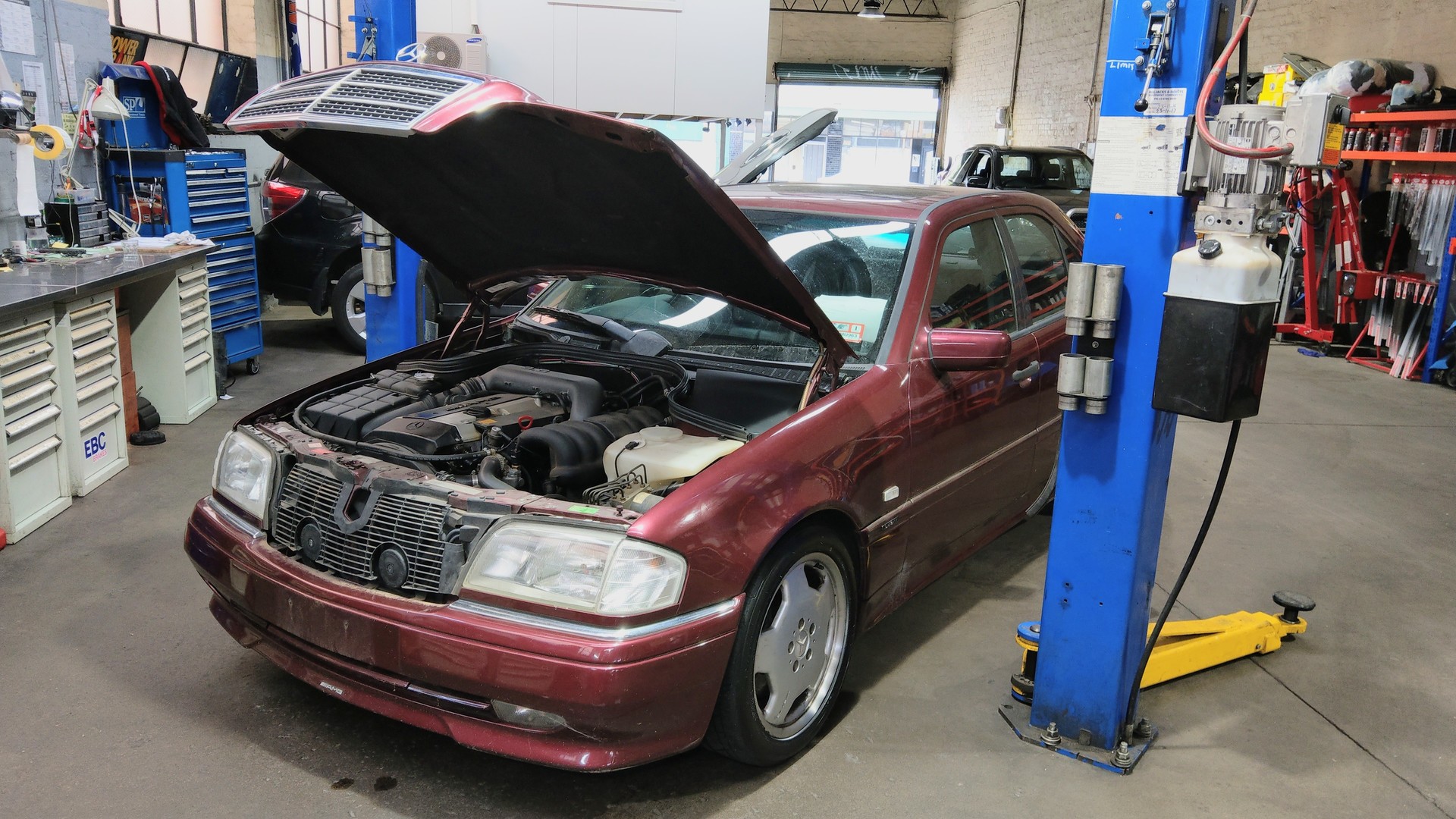 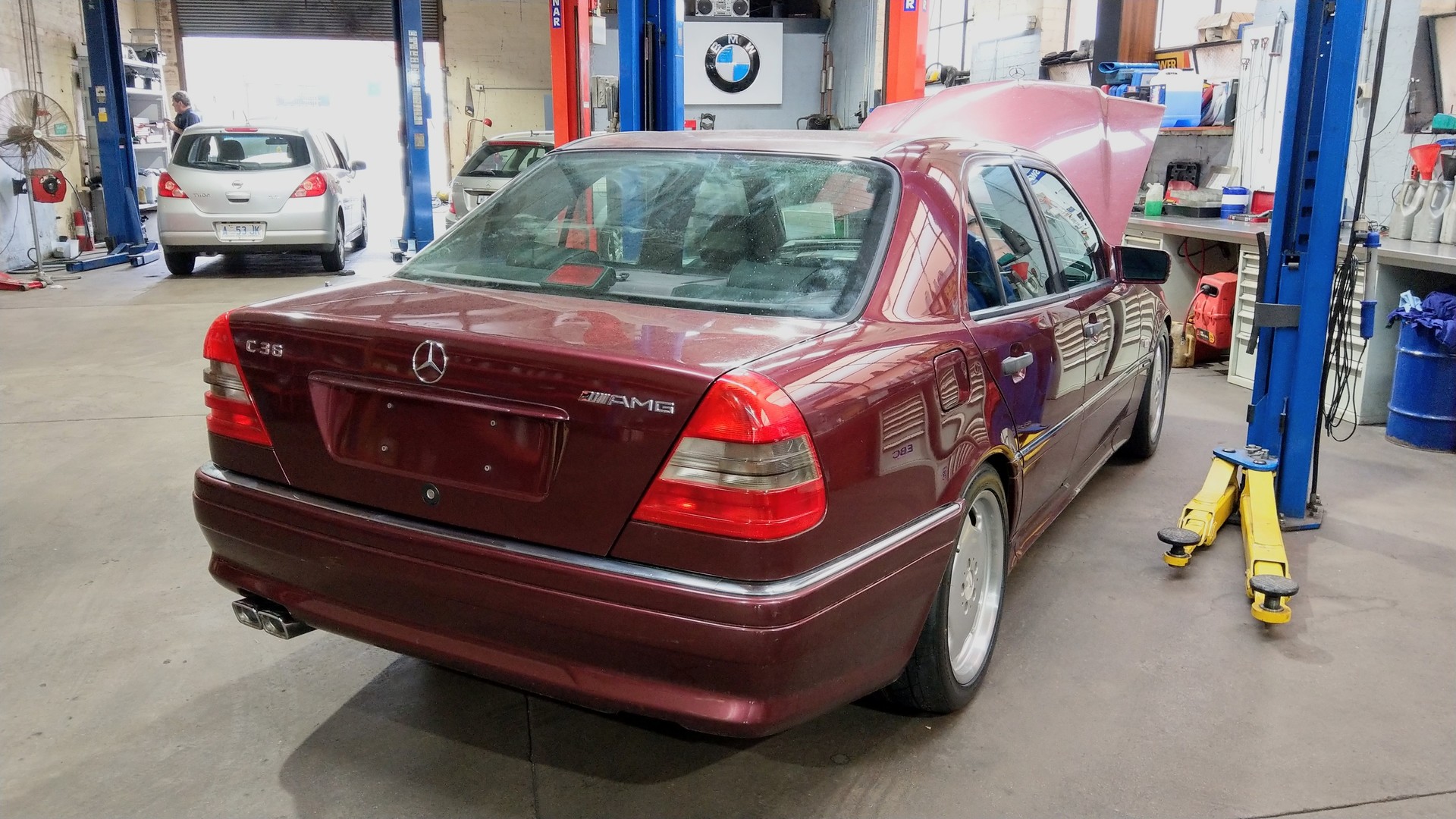 In 1995, the first Mercedes-AMG joint operation was confirmed and finalised and it would be in the form of a C-Class sedan. With a heavily modified M104 In-line six cylinder engine and a host of other goodies including sports body kit and carbon fibre inserts, this car was produced to counter the BMW M3.

With a power output figure of 206 kW and 385 N-M of torque, from a six cylinder engine, meant this was an amazing machine. Especially considering that Australian sports cars such as the HSV Clubsport was only making 185 kW out of a 5litre V8 engine.

What makes the C36 more special, is the fact that it was also the first AMG that we could purchase here in Oz as prior to this, AMG packages were only available in Germany. But with a price tag of more than $140,000 AUD new, it’s no surprise that only 70 or so were ever ordered and delivered to Australia. So they’re not something you get to see everyday. 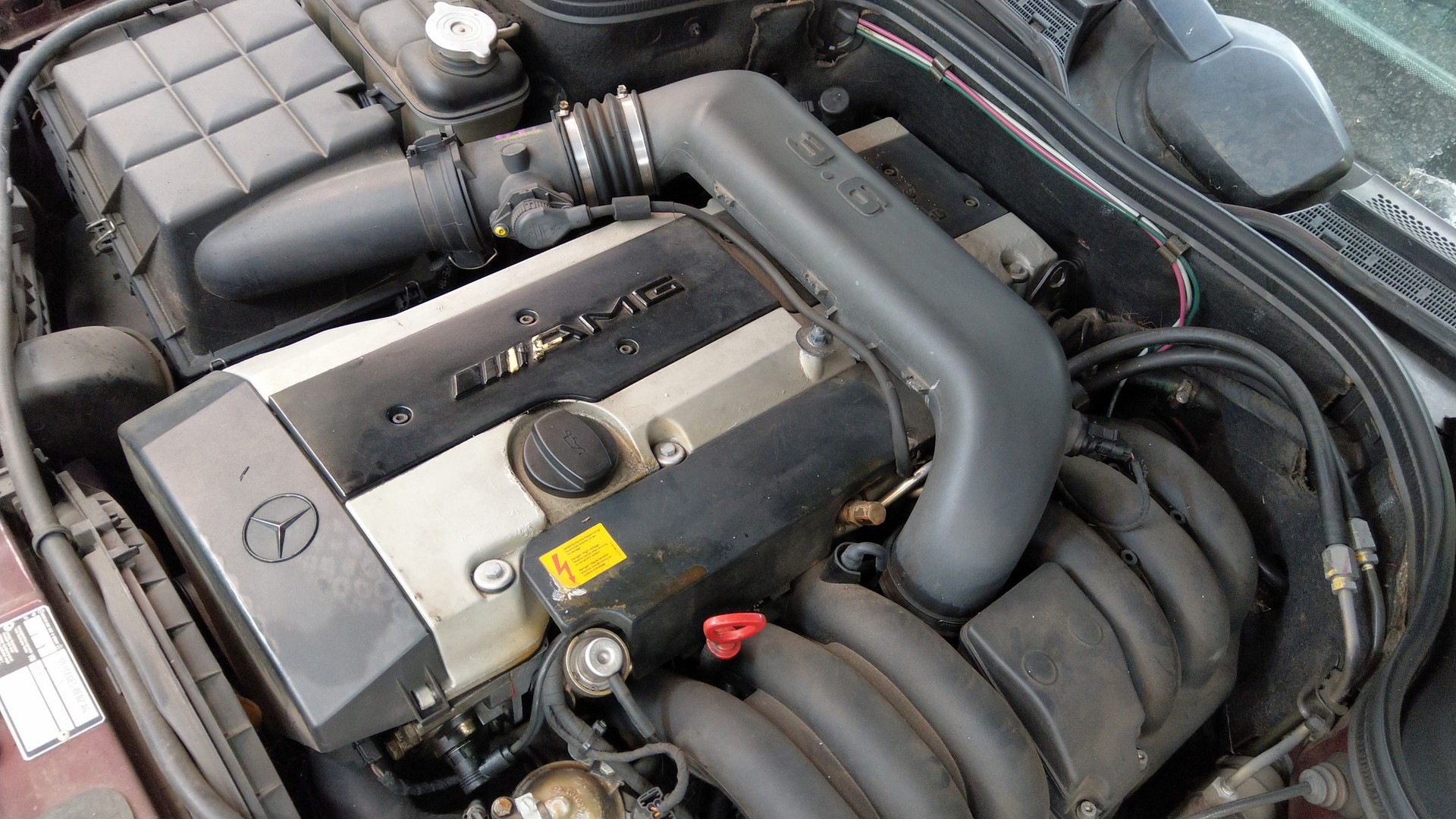 So now you know a bit more about the C36, you can see why we were so interested in this unregistered, rough running old car. It’s because we knew what we were looking at and we could see its potential.

It had been sitting under a tree in the front yard of a house since the original owner had passed several years ago. A friend of David’s had told him about how he drove past it all the time once he had learnt David was looking to purchase one, and after knocking on the door and speaking to the family of the deceased, a price was agreed on and David drove it straight to our door on our first day back for the year in January.

David gave us a few simple instructions… Get it looking great, get it running great, replace anything that’s missing and get it done by April. April being the Mercedes-Benz Club of Victoria concourse event. We accepted the challenge and got straight to it. 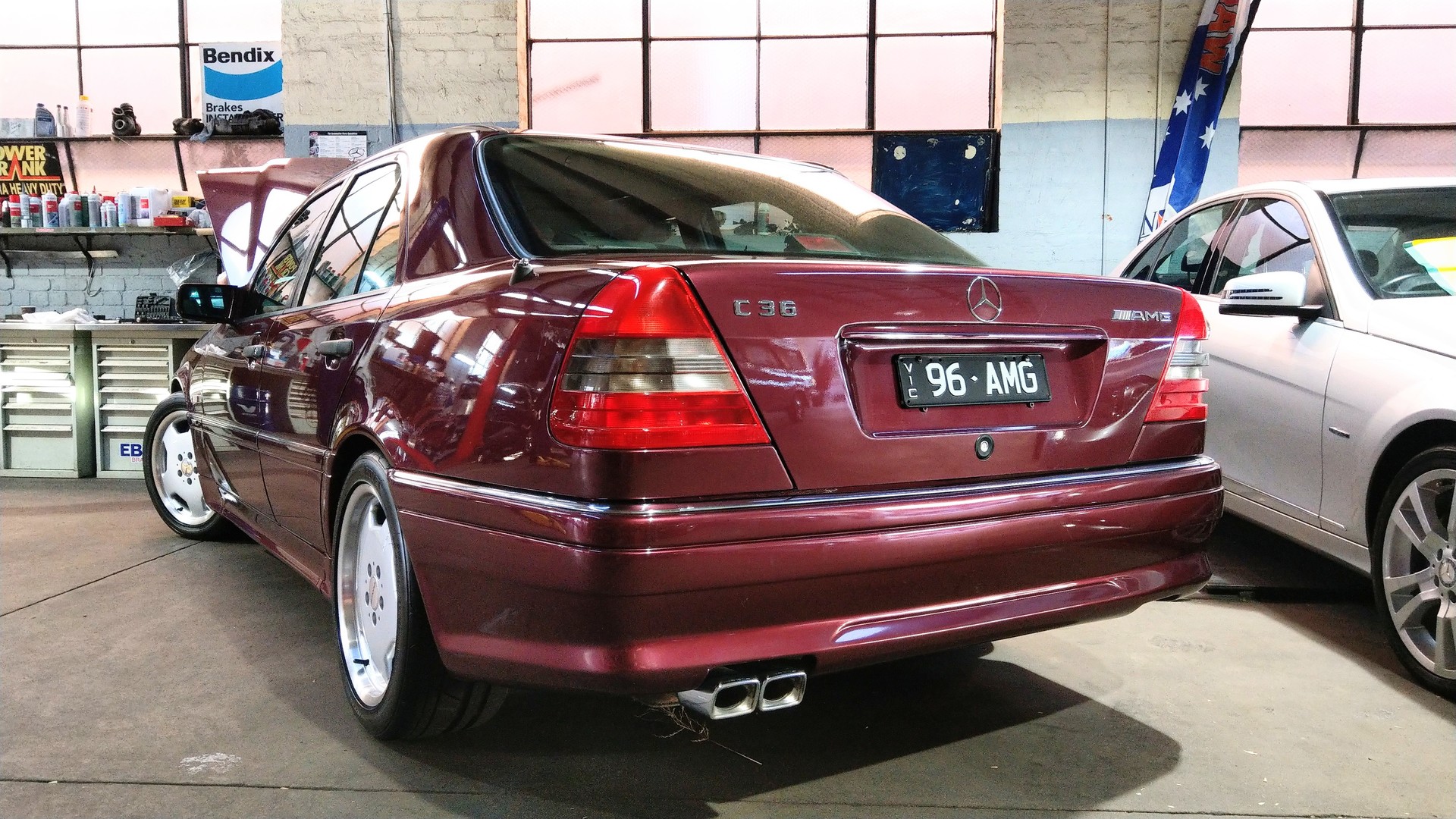 First thing to do was getting it washed and cleaned, inside and out. This was when we discovered how bad the condition of the exterior really was. Almost every panel was dented or scratched and every piece of the body kit had paint flaking off it. Under the bonnet had seen better days too, with the engine misfiring and the covers had been badly painted with a $2 black enamel, straight over the AMG logo. The interior however was in better shape and needed minor attention.
Using a paintless dent repairer, 99% of the body was straight again and a cut & polish removed most of the scratches, but the body kit really needed to resprayed due to the bad scratches and flaking. But before it could go anywhere, the mechanical side of things had to be inspected and repaired.

The car received a host of new parts including suspension bushes, ball joints, steering components and brake parts. A major service including plugs, leads, filters and all fluids were replaced before diagnosing and repairing the misfire with coils. Now the car was running as good as new and drove the same way, we sent it to the panel shop for some fresh paint.

The car was now shining, but still needed some work. The genuine staggered AMG wheels were sent away to be refurbished and the engine bay was cleaned whilst the engine covers were sanded right back and correctly painted before being finished with a new AMG decal logo.

Now the car was perfect and with the final wash and detail completed, we were happy to return the car to David before the deadline. The smile on his face was all we needed to see to know he was happy with the final outcome.

We wish you all the best with your beautiful machine David. 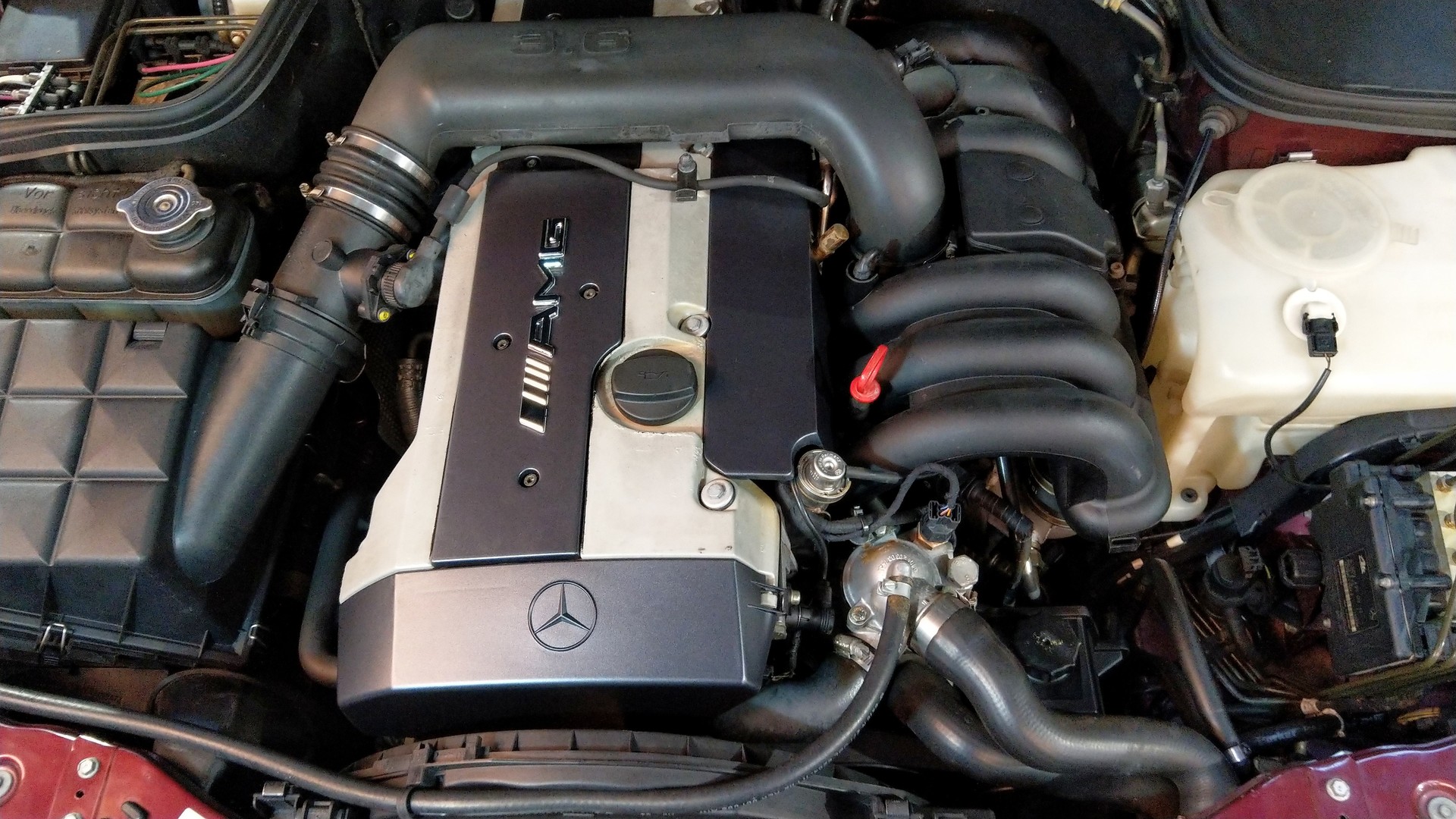 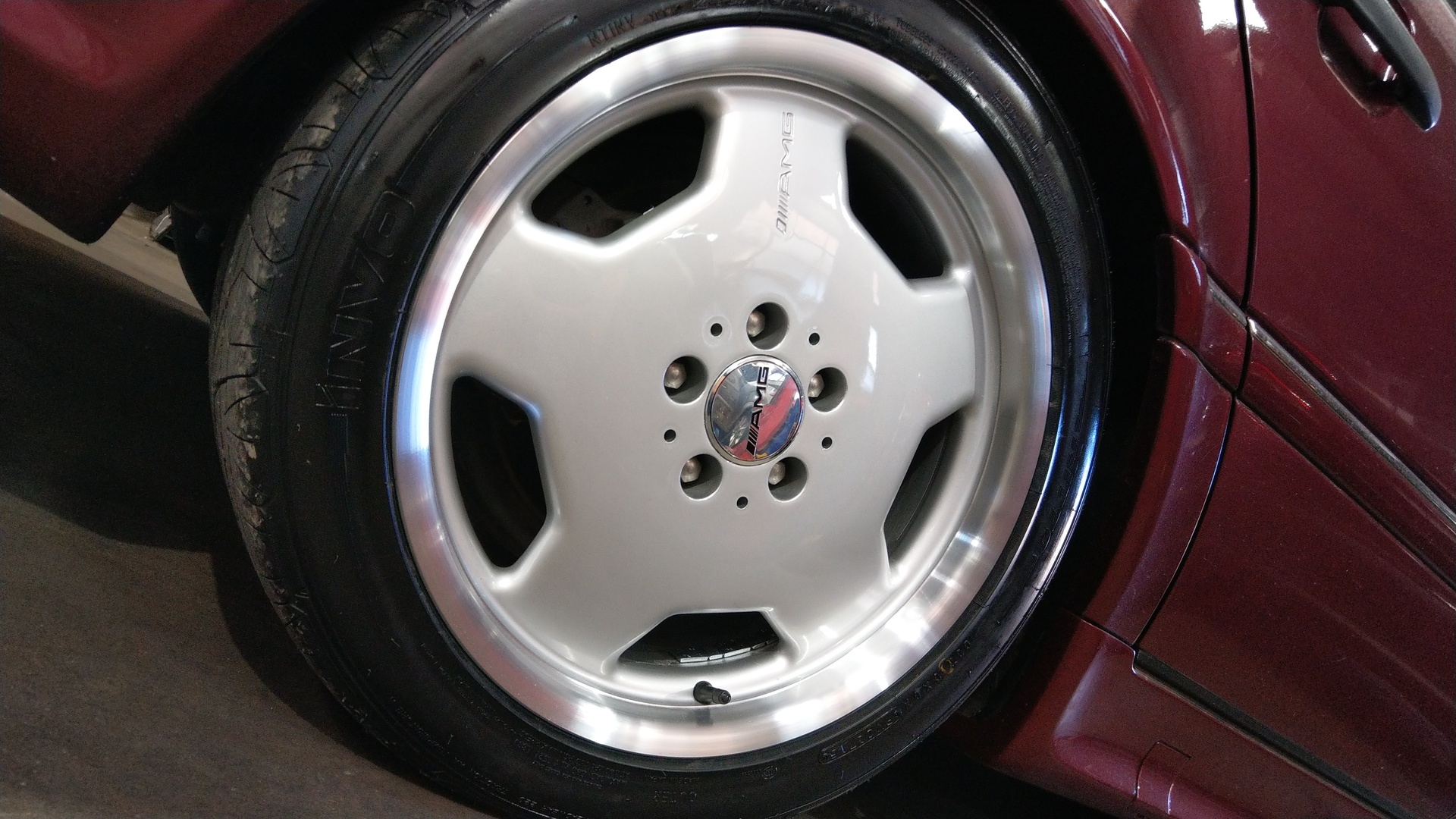 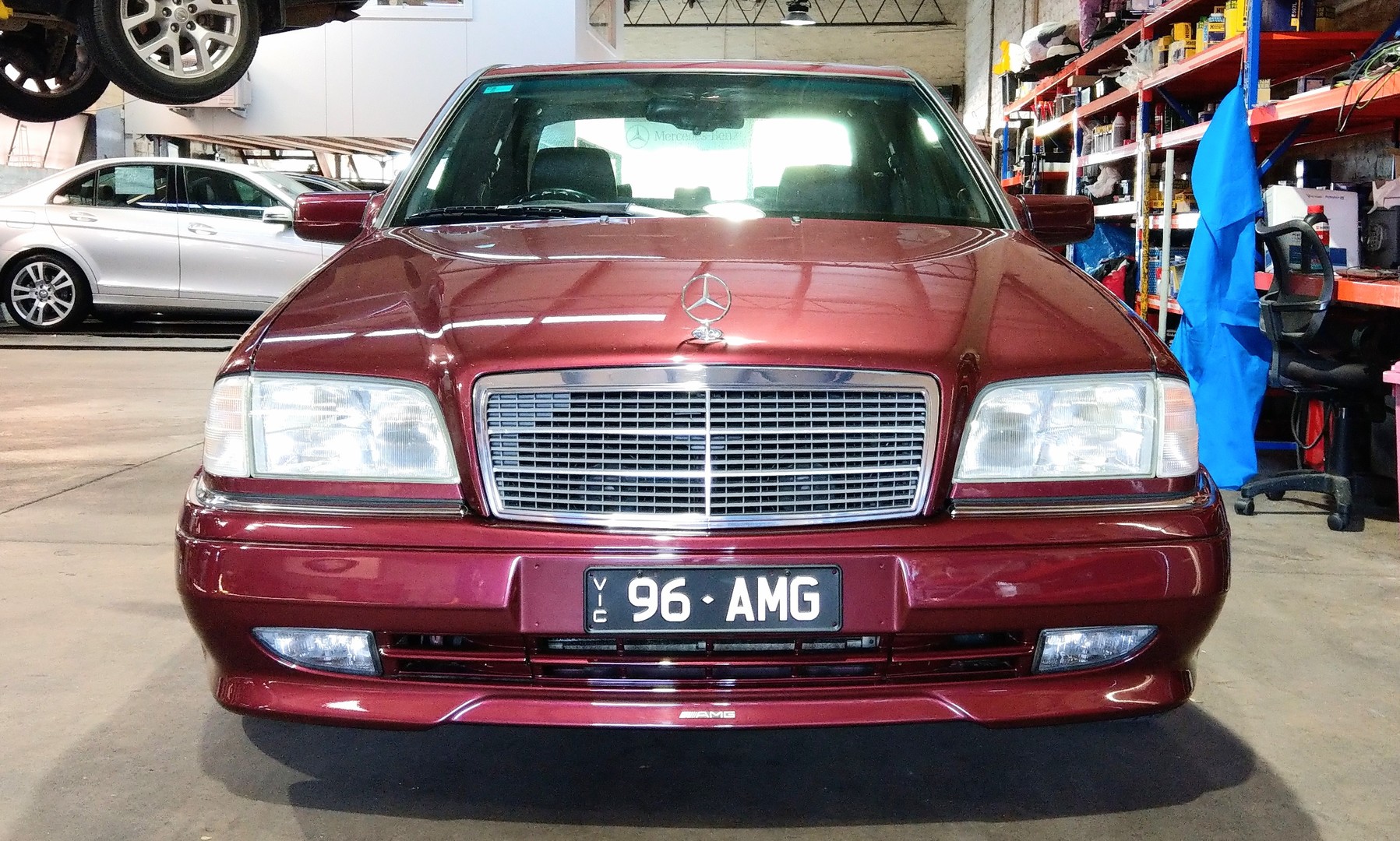